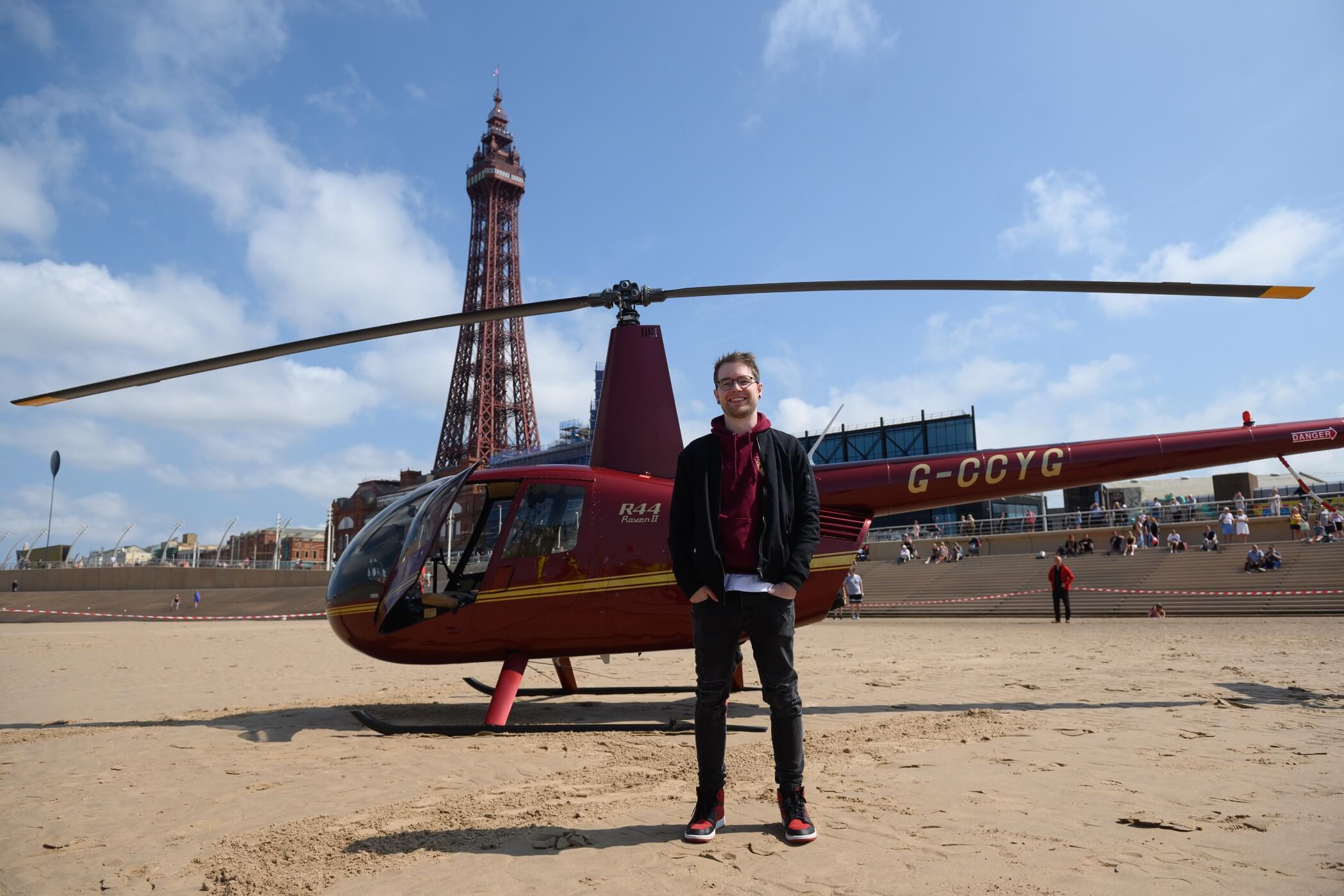 The online gaming extraordinaire, followed by millions around the world, arrived by helicopter on the beach in Blackpool before coming face-to-face with his figure at Madame Tussauds – the first time he has ever been immortalised as a waxwork!

Now, his waxwork figure will be on display alongside some the world’s most well-known faces, including Marvel’s Thor and Ariana Grande, giving DanTDM fans the chance to grab a selfie with their idol.

It was created after DanTDM superfan Scarlett, whose mum Trudie Knowles is guest experience manager at Madame Tussauds Blackpool, pitched the idea.

Speaking after his ‘introduction’ to his waxwork, Dan said: "It's a real honour to have been chosen to have a Madame Tussauds waxwork made of me. I still can't quite believe it. And coming face to face with myself, in a replica of my office too, was incredible.

“I really hope people have fun hanging out with me in there, it's unreal how realistic it all is. The team of artists who do this for a living are so talented.”

His waxwork took around 800 hours to create, with experts in hair, makeup and sculpting all lending their skills to perfect the figure.

Each figure is sculpted using around 150kg of clay, with an average of 25 individual artists working on just one figure and approximately 75 hours of hand painting.

Dan’s online video channels include commentaries on popular video games such as Minecraft, Roblox and Pokemon, winning over his masses of fans thanks to his witty and informative content.

In addition to his YouTube superstar status, Dan is an accomplished author, having created his graphic novel, Trayaurus and the Enchanted Crystal in 2016, while he has also voiced characters in animated film Ralph Breaks the Internet and Netflix series Skylanders Academy.

Helping Dan to arrive in Blackpool in style was helicopter operator HeliSpeed. Operations director Gemma Walker said: “We are delighted to help support the internationally recognised Madame Tussauds unveiling of the new waxwork of DanTDM.”

Featuring more than 80 famous faces, Madame Tussauds Blackpool gives visitors the chance to get up close and personal with their heroes, from sporting stars to TV favourites, movie icons, singing sensations and everything in between.

“There’s an incredibly diverse mix of celebrities here and Dan’s figure is just one example of how we’re constantly updating our celebrity rollcall, ensuring there’s something here for the whole family to enjoy.

“We know that Dan is extremely popular with gaming fans, so we’re really looking forward to unveiling his waxwork figure to his huge following and allowing them to get that all important selfie. And we have even recreated his famous office! We are sure he will be massively popular here in Blackpool!”

For further information about Madame Tussauds Blackpool and to book tickets, visit: https://www.madametussauds.com/blackpool/

Back To News
We use cookies on our website to give you the most relevant experience by remembering your preferences and repeat visits. By clicking “Accept”, you consent to the use of ALL the cookies.
Cookie settingsACCEPT
Manage consent

This website uses cookies to improve your experience while you navigate through the website. Out of these, the cookies that are categorized as necessary are stored on your browser as they are essential for the working of basic functionalities of the website. We also use third-party cookies that help us analyze and understand how you use this website. These cookies will be stored in your browser only with your consent. You also have the option to opt-out of these cookies. But opting out of some of these cookies may affect your browsing experience.
Necessary Always Enabled

Performance cookies are used to understand and analyze the key performance indexes of the website which helps in delivering a better user experience for the visitors.

Analytical cookies are used to understand how visitors interact with the website. These cookies help provide information on metrics the number of visitors, bounce rate, traffic source, etc.

Advertisement cookies are used to provide visitors with relevant ads and marketing campaigns. These cookies track visitors across websites and collect information to provide customized ads.

Other uncategorized cookies are those that are being analyzed and have not been classified into a category as yet.

SAVE & ACCEPT
Powered by